This is the web outpost of my BBS called "Kuehlbox". First established in 1993, this BBS had many names and it definately has been more off- than online..
But here it is back again just like it's 1995! :)

On this page, you find a lot of information about the history of my BBS's, my Husky- and GoldED repository for Debian and Raspbian, a mirror of the Fido History Project (by Ulrich Schroeter), an easy download of the latest nodelists for fidonet and some other ftn networks and most important: You can visit the actual BBS! :)

Of course, this is just a pretty useless demonstration of ancient communication techniques and for wetting some old nerds eyes (and maybe some panties, too.. ;) ), but I have set up a completely functional BBS with files, messages, Door-Games (LoRD and TradeWars2002 and many, many more...) and even an ansi-gallery containing all the artpacks by ACiD, iCE and Blocktronics. 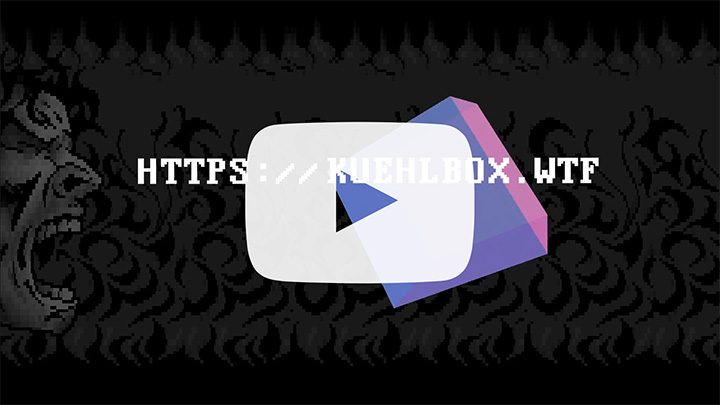 Back in the dark ages of online, before the WWW and when "nerd" still was a swearword and no fashion statement, we already were online in communities sharing files, messaging and chatting all around the world.
Our pre-internet was called "BBS" - Bulletin Board System(s). That's a piece of software, one guy has running on his computer, connected to a modem, so others could call it up and browse thru text-mode menus for down- and uploading, messaging, playing games and chatting.

But since you found your way here, I guess you already know and you're one of us (or I lured you over here.. ;) ).
If you aren't, but you're interested in this crazy sounding stoneage-technique, I recommend watching this excelent documentary by Jason Scott: BBS - The Documentary.

It must've been 1986 or something, when I first visited the computer room of my dads employer: A small chamber filled with what I recall as an IBM System/360, but definately some big-ass mainframe system.

I had (and still have) no Idea, what they really did with this.. But one day, the system operator showed me her magic: She wrote a message with her terminal and only seconds later, her collegue came over from his office answering that message. Without having spoken a word with her, before!
This looked like magic to me at a time, I didn't even have my first C64 and this could've been the very moment, when I decided to do something like that for a living, when I'm grown up.

Years later, in 1992, at the age of 13 or 14, I was all into computers and most of all: Computer demos. I already started doing some coding in Turbo Pascal and Quick Basic and these demos looked so much better than anything I could think of coding myself.
In these demos the coders advertised their BBSs all over the world. I started reading what a "BBS" is and soon decided that this is something, I want to participate with. "Maybe, one day, I'll become just as cool as the Future Crew..!" ;)

So I bought my first Modem: 2400baud internal.
Since I had no Idea where to find BBS numbers, I browsed all my demo-related stuff for numbers in germany, so I won't blow my parents phone-bill. What I found what the "Fantasia BBS", run by "Mogwai" at the .nfo-file of "WOW II" - a .mod-file player, I used back then.

I called the BBS a few times, downloaded an up-to-date version of WOW II, read a few messages and finally entered the chatroom.
There already were a few others and they were chatting with other just the way, the system operator at my dads work did.
But I only understood half of it.. Strange abbreviations and even stranger symbols at the end of their sentences. Something like: "ROFL" or ":-)".

So I asked the SysOp and this is what happened:

I soon found out about lists of real local BBS's - the "06er-Liste" containing hundreds of BBS's with their number starting with "06" (meaning local tarifs or at least less expensive..) and so I never visited the Fantasia BBS again - but it was the very first BBS I ever visited and its sysop explained emoticons to me. :)

After having been involved into the local BBS scene and knowing several guys just as nerdy as me, living in or near my hometown, I wanted to become more active. So I decided to install my very first own BBS: The "Doom Box" (Not named after the game, but after the "Legion of Doom" - a WWF Wrestling Tag-Team. But now, that you know, maybe I'll have to kill you.. ;) )
Running ProBoard on my moms fax-line, online from about 6pm 'till I had to go to sleep.. ;)

One should think nobody really recognized me and my BBS, but thanks to the "06er-Liste", many did and I found a lot of other SysOps giving tips and offering help. Some of them became real friends and with some, I still have contact to, today..

So very soon it became very clear, that the Doom-Box was pretty "lame" and I'ld have to come up with something bigger, being online 24/7.

I've been working for a local computer-store for some time and of course the boss was a nerd himself and of course he was very interested in my BBS.
"Maybe, this could be some modern way to provide information for my customers!", he thought.
Well, it could'nt.. ;) But he offered me to set up a BBS computer and system on his costs, running at his house and phone-line, 24/7 and I'm still the SysOp doing all the technical stuff using "Backdoor" - a door allowing you to access DOS from remote.

Awesome! I did what he asked me to and that became the "Kuehlbox". Running 24/7 with 28.8kbps on a dedicated PC with "Remote Access".

This worked pretty well for quiet some time: My user- and filebase grew, I joined FidoNet, connected with more SysOps and became close friends with some of the users. I even organized several "user-meetings" with 30+ attendees.

At the age of 16, a BBS called "Kuehlbox" just wasn't krewel enough anymore. The layout looked way to clean and I knew: The real cool people had to use "PCBoard" for their BBS.
Also my boss started recognizing that this BBS could do absolutely nothing for his business and so he gave me all the hardware, including the modem and I set up my third and last BBS and the one with the most embarrissing name: dA CyberDawg!
And since we're being so honest, right now, here's my second confession: I renamed myself from "Gandalf" (which was an okay nick, back then, I think..) into "Rave!" (mind the exclamation mark! ;) ) - no - even worse: "R/┤\/e!" :D /o\

Main focus of the BBS was set on demo and music scene stuff and on general coolness.. ;D
But besides all this teenage angst, I set up a pretty decent system with everything, I good BBS needed back then: I had BBStros, general .nfo-files, always the latest files and up to 30 different callers a day.

After almost 2 years, I had to close the BBS in end of 1996 and soon later go offline for the next 7 years due to personal reasons...

This is the BBS, I loosely recreated here. But with the name of the previous one.. ;)

After having spent the last 12 years on the internet, designing websites and coding applications for a living, I watched the awesome documentary "BBS" and suddenly, I remembered all the fun I had and how much I learned about coding and about people, back then and I started searching for any traces of this on the internet.
Besides some old fido mail, I didn't find a single trace of my BBSs. I also didn't find any backup of anything from that time. But I did find an active, good looking BBS software for linux: "Mystic BBS" and quiet a lot BBSs still being online.

So I decided to set up my old BBS again, too. Looking they way, I remember my last design, minus the name and uber-leet behaviour. We all grew up somehow, after all - didn't we? ;)

Meanwhile, only weeks later, I'm in contact with several other SysOps, joined FidoNet and some other FTN-Networks, redesigned the complete BBS and added quiet some files: The complete Radical Rhythms Archive and most of the Eye-D-Alistic Releases, but also some new files, like all the Party-Releases of 2013 & 2014 from Assembly, Evoke and Demodays. Also: Everything from every Underground Conference that ever was and will be, since UC1 was the only party, I attended myself. ;)

While Kuehlbox is great fun and will always stay my main focus, it is a modern BBS using modern software on a modern operating system.
This was fine for a while, but just like every junkie, I soon needed a stronger fix. ;)
So I started experimenting with emulation, several embedded systems and what felt like every single microsoft os, starting with DOS 6.22, back in 2016 already... ;)
Long story short: Nothing worked completely and I gave up several times, until I found out what was way to easy to think of: Every Windows version can still run 16bit DOS software, as long as windows is a 32bit version!

So in spring of 2019, I finally set up and relaunched my 1995 PCBoard BBS, called "Da CyberDawg" and while Kuehlbox is what a BBS looks like in 2021, run by a (somewhat) grown-up, Da CyberDawg is what a BBS (my BBS!) looked like back in 1995, run by a teenager! Loaded with over-lengthy ansi quilts, modded to the max with selfwritten PPEs with main focus on kewlness. ;)

Check out the dedicated page for Da CyberDawg for more info or log in directly.